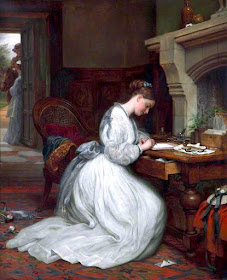 When children become a certain age, some Christian parents think it would be a great idea to allow them to get a job to "keep them busy" and earn some money.  Not only is this popular for boys, but also has become popular for teenage girls.  Why parents want to send their teen daughters out into the world to earn money is beyond me.  It is not in a young woman's nature to hold a job, and certainly doesn't prepare her to be a wife and homemaker.

My parents did this with me, and I had several jobs before I was saved.  One summer before I was even old enough to hold a paying job, they sent me to a camp to be a camp "counselor in training" to "keep me busy", and they even paid me to do it since it wasn't a paying position.  All of these places of employment did me no good and actually caused much harm.

Before parents consider allowing or even encouraging their teens to get a job outside the home, there is much to think about Biblically, especially with concern for their souls and how a place of employment might affect their future.  Jobs outside the home hold a lot of danger and temptation for young people who still are not mature.  It is very similar to sending them off to public school. 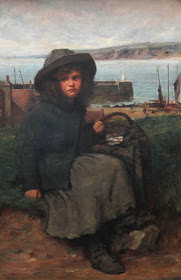 At a job, teens are exposed to and cannot get away from


There are many dangers of sending your teen out to work in our modern world, and loving, Christian parents would do best to seriously consider these.  Even homeschooling parents who have foreseen the dangers of public school, sometimes send their children out to jobs where they will be exposed to many of the great evils they were seeking to avoid at school.

Even if you send your teen to work at a place that you are familiar with, or even to a place of employment where the owners are professing Christians, you will run into many of the same issues.

What is the solution then?

For young women, I see no reason for her to ever need "job experience", as the Bible has made it clear for what young women are to be concerned with.

The aged women likewise, that they be in behaviour as becometh holiness, not false accusers, not given to much wine, teachers of good things;
That they may teach the young women to be sober, to love their husbands, to love their children,
To be discreet, chaste, keepers at home, good, obedient to their own husbands, that the word of God be not blasphemed. ~Titus 2:3-5 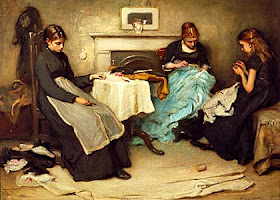 There is no reason for a daughter from a Christian home to get a job outside of the home.  Let her learn beside her mother, the many and varied skills of home-keeping while she has the time on her hands!  It makes no sense for her to wait until she is married to learn these needed skills.  There are always more things to learn, and before she is married, she has the ability to become very good at these things. Older daughters at home can be a tremendous blessing to their mothers.  Daughters at home should be learning contentment within the home sphere and to not be led by selfish desires.

For young men, it is a bit more difficult.  Obviously, young men need to at some point learn to be providers.  At what time this occurs and in what way will greatly depend on the individual young man, his walk with Christ, and his maturity.  But do not be fooled into thinking that your teen boy is beyond being tempted or lured away from his faith by the above mentioned dangers.  Even if he is not led away into a snare, if he's working at a place of employment, he will be exposed to things that will most likely leave an impression on his young heart for the rest of his life.  That's why we must be ever so careful and wise in our decisions.  It would be best if his Christian father had his own business that his son could get involved in.  That way his father can still be with his young man and guide him as he steps out into the working world.  Other options are if your teen son can have his own "business" doing yard work or other such things for neighbors where he is still close to home and has a sense of accountability.  If he has a brother or even his own father to come alongside him, even better, as they can provide each other accountability. 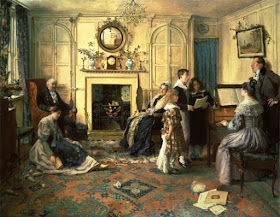 Other ways to keep teens busy are to have a family life that is busy with regular family dinners and family worship.  These are important duties that should be happening every day, and many teens start to miss out on them if they are at jobs in the evenings.  Families can also minister together to other people in many ways, as well as share the Gospel.  Don't forget family walks, outings, and other enjoyable leisure activities.  Doing things together as a family is so beneficial for all family members, and prepares our young teens to one day have their own families and spend time with them instead of leading their separate lives.

Even though this may seem "different", don't cave into the pressure of those around you to do what everyone else is doing or what seems right in their own eyes.  What is most important is our children's souls, and so we must always have their spiritual wellbeing in mind.