On Motherhood and Profanity by Elizabeth Elliott

"OK now, which one of you clowns put that bag of M 'n' Ms in the grocery cart?" The mother looks harried.

Two boys, maybe five and seven, eye each other and race away toward the gumball machine near the supermarket door. There is an infant strapped to a plastic board on top of the groceries, and a two year old occupying the built-in child seat in the cart. The mother picks up the M 'n' M candy bag and starts toward the aisle to return it. The two year old screams and she relents, throws the bag in with the rest of her purchases, patiently waits her turn at the check-out, fishes five ten-dollar bills from her purse, receives her small change, and pushing the cart with the babies in it, herds the two boys through the rain to the station wagon in the parking lot.

I see this implacable succession of exigencies in my mind's eye. They come with being a mother. I also see the dreams she dreams sometimes--write a novel, agents call, reviews come in. TV interviews, autograph parties, promotional traveling, a movie contract--preposterous dreams. Try something a little more realistic. Cool modern office, beautiful clothes, make-up and hairdo that stay done all day. A secretarial job perhaps, nothing spectacular, but it's work that actually produces something that doesn't have to be done over at once. It's work that ends at five o'clock. It means something.

I know how it is. I have a mother. I am a mother. I've produced a mother (my daughter, Valerie, has a two year old and expects another child soon). I watched my own mother cope valiantly and efficiently with a brood of six. ("If one child takes all your time," she used to say, "six can't take any more.") We were--we still are--her life. I understand that. Of all the gifts of my life surely those of being somebody's wife and somebody's mother are among the greatest.

But I watch my daughter and other mothers of her generation and I see they have some strikes against them that we didn't have. They have been told insistently and quite persuasively that motherhood is a drag, that tradition is nonsense, that what people have always regarded as "women's work" is meaningless, that "roles" (a word we never bothered much about until a decade or so ago) are changing, that femininity is a mere matter of social conditioning, that it's time to innovate. If the first-grade readers show a picture of a woman driving a hook-and-ladder and a man doing a nurse's job, see what happens to the conditioning. Abolish the stereotypes and we can abolish the myths of masculinity and femininity.

I hear this sort of claptrap, and young mothers often come to me troubled because they can't answer the arguments logically or theologically. They feel, deep in their bones, that there is something terribly twisted about the whole thing but they can't put their finger on what it is.

I think I know what it is. Profanity. Not swearing. I'm not talking about breaking the Third Commandment. I'm talking about treating as meaningless that which is freighted with meaning. Treating as common that which is hallowed. Regarding as a mere triviality what is really a divine design. Profanity is failure to see the inner mystery.

When women--sometimes well-meaning, earnest, truth seeking ones say "Get out of the house and do something creative, find something meaningful, something with more direct access to reality," it is a dead giveaway that they have missed the deepest definition of creation, of meaning, of reality. And when you start seeing the world as opaque, that is, as an end in itself instead of as transparent, when you ignore the Other World where this one ultimately finds its meaning, of course housekeeping (and any other kind of work if you do it long enough) becomes tedious and empty.

But what have buying groceries, changing diapers and peeling vegetables got to do with creativity? Aren't those the very things that keep us from it? Isn't it that kind of drudgery that keeps us in bondage? It's insipid and confining, it's what one conspicuous feminist called "a life of idiotic ritual, full of forebodings and failure." To her I would answer ritual, yes. Idiotic, no, not to the Christian--for although we do the same things anybody else does, and we do them over and over in the same way, the ordinary transactions of everyday life are the very means of transfiguration. It is the common stuff of this world which, because of the Word's having been "made flesh," is shot through with meaning, with charity, with the glory of God.

But this is what we so easily forget. Men as well as women have listened to those quasi-rational claims, have failed to see the fatal fallacy, and have capitulated. Words like personhood, liberation, fulfillment and equality have had a convincing ring and we have not questioned their popular definitions or turned on them the searchlight of Scripture or even of our common sense. We have meekly agreed that the kitchen sink is an obstacle instead of an altar, and we have obediently carried on our shoulders the chips these reductionists have told us to carry.

This is what I mean by profanity. We have forgotten the mystery, the dimension of glory. It was Mary herself who showed it to us so plainly. By the offering up of her physical body to become the God-bearer, she transfigured for all mothers, for all time, the meaning of motherhood. She cradled, fed and bathed her baby--who was very God of very God--so that when we cradle, feed and bathe ours we may see beyond that simple task to the God who in love and humility "dwelt among us and we beheld his glory."

Those who focus only on the drabness of the supermarket, or on the onions or the diapers themselves, haven't an inkling of the mystery that is at stake here, the mystery revealed in the birth of that Baby and consummated on the Cross: my life for yours.

The routines of housework and of mothering may be seen as a kind of death, and it is appropriate that they should be, for they offer the chance, day after day, to lay down one's life for others. Then they are no longer routines. By being done with love and offered up to God with praise, they are thereby hallowed as the vessels of the tabernacle were hallowed--not because they were different from other vessels in quality or function, but because they were offered to God. A mother's part in sustaining the life of her children and making it pleasant and comfortable is no triviality. It calls for self-sacrifice and humility, but it is the route, as was the humiliation of Jesus, to glory.

To modern mothers I would say "Let Christ himself be your example as to what your attitude should be. For he, who had always been God by nature, did not cling to his prerogatives as God's equal, but stripped himself of all privilege by consenting to be a slave by nature and being born as a mortal man. And, having become man, he humbled himself by living a life of utter obedience, even to the extent of dying, and the death he died was the death of a common criminal. That is why God has now lifted him so high. . ." (Phil. 2:5-11 Phillips).

It is a spiritual principle as far removed from what the world tells us as heaven is removed from hell: If you are willing to lose your life, you'll find it. It is the principle expressed by John Keble in 1822:


If on our daily course our mind
Be set to hallow all we find,
New treasures still, of countless price,
God will provide for sacrifice 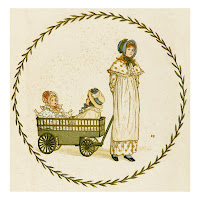