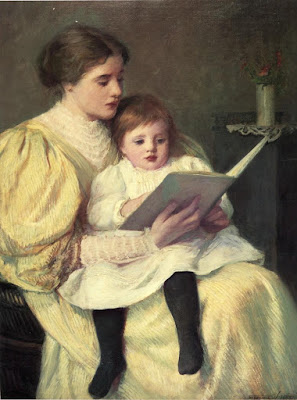 "But when people begin to talk about this domestic duty as not merely difficult but trivial and dreary, I simply give up the question. For I cannot with the utmost energy of imagination conceive what they mean. When domesticity, for instance, is called drudgery, all the difficulty arises from a double meaning in the word. If drudgery only means dreadfully hard work, I admit the woman drudges in the home, as a man might drudge at the Cathedral of Amiens or drudge behind a gun at Trafalgar. But if it means that the hard work is more heavy because it is trifling, colorless and of small import to the soul, then as I say, I give it up; I do not know what the words mean.


To be Queen Elizabeth within a definite area, deciding sales, banquets, labors and holidays; to be Whiteley within a certain area, providing toys, boots, sheets, cakes and books, to be Aristotle within a certain area, teaching morals, manners, theology, and hygiene; I can understand how this might exhaust the mind, but I cannot imagine how it could narrow it.

How can it be a large career to tell other people’s children about the Rule of Three, and a small career to tell one’s own children about the universe? How can it be broad to be the same thing to everyone, and narrow to be everything to someone? No; a woman’s function is laborious, but because it is gigantic, not because it is minute. I will pity Mrs. Jones for the hugeness of her task; I will never pity her for its smallness."

-What’s Wrong with the World by G.K. Chesterton