Lose Your Life to Find It

And he said to them all, If any man will come after me, let him deny himself, and take up his cross daily, and follow me.  For whosoever will save his life shall lose it: but whosoever will lose his life for my sake, the same shall save it. ~Luke 9:23, 24

The life of our adorable Lord was a life of continuous trial. From the moment He entered our world He became leagued with suffering; He identified Himself with it in its almost endless forms. He seemed to have been born with a tear in His eye, with a shade of sadness on His brow. He was prophesied as “a man of sorrows and acquainted with grief.”

And, from the moment He touched the horizon of our earth, from that moment His sufferings commenced. Not a smile lighted up His benign countenance from the time of His advent to His departure. He came not to indulge in a life of tranquility and repose; He came not to quaff the cup of earthly or of Divine sweets—for even this last was denied Him in the hour of His lingering agony on the cross. He came to suffer—He came to bear the curse—He came to drain the deep cup of wrath, to weep, to bleed, to die. Our Savior was a cross-bearing Savior: our Lord was a suffering Lord.

And was it to be expected that they who had linked their destinies with His, who had avowed themselves His disciples and followers, should walk in a path diverse from their Lord’s? He Himself speaks of the incongruity of such a division of interests: “The disciple is not above his Master, nor the servant above his Lord. It is enough for the disciple that he be as his Master, and the servant as his Lord.” There can be no true following of Christ as our example, if we lose sight of Him as a suffering Christ—a cross-bearing Savior.

There must be fellowship with Him in His sufferings. In order to enter fully and sympathetically into the afflictions of His people, He stooped to a body of suffering: in like manner, in order to have sympathy with Christ in His sorrows, we must, in some degree tread the path He trod. Here is one reason why He ordained, that along this rugged path His saints should all journey. They must be like their Lord; they are one with Him: and this oneness can only exist where there is mutual sympathy.

The church must be a cross-bearing church; it must be an afflicted church. Its great and glorious Head sought not, and found not, repose here: this was not His rest. He turned His back upon the pleasures, the riches, the luxuries, and even the common comforts of this world, preferring a life of obscurity, penury, and suffering. His very submission seemed to impart dignity to suffering, elevation to poverty, and to invest with an air of holy sanctity a life of obscurity, need, and trial.

We have seen, then, that our blessed Lord sanctified, by His own submission, a life of suffering; and that all His followers, if they would resemble Him, must have fellowship with Him in His sufferings. The apostle Paul seems to regard this in the light of a privilege. “For unto you,” he says, “it is given in behalf of Christ, not only to believe on Him, but also to suffer for His sake.” It seems, too, to be regarded as a part of their calling. “For even hereunto were you called: because Christ also suffered for us, leaving us an example, that you should follow His steps.”

Happy will be that afflicted child of God, who is led to view his Father’s discipline in the light of a privilege. To drink of the cup that Christ drank of—to bear any part of the cross that He bore—to tread in any measure the path that He trod, is a privilege indeed.

This is a distinction which angels have never attained. They know not the honor of suffering with Christ, of being made conformable to His death. It is peculiar to the believer in Jesus—it is his privilege, his calling.  ~Octavius Winslow 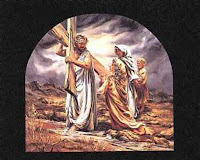