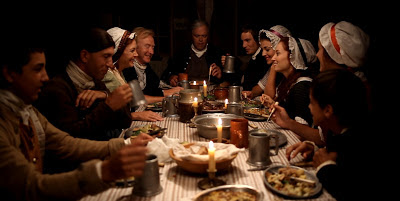 I am very pleased that I was contacted recently to review a new exciting TV drama Courage, New Hampshire and even more excited that one of you will win the first season!  (You'll have to keep reading to learn how).


Courage, New Hampshire is an 18th century costume drama that depicts the tumultuous years leading to American Independence. This show has an impressive cast of both British and American talent including Jim Tavaré (Harry Potter), Joe Massingill (Trouble with the Curve), and veteran character actor Basil Hoffman (The Artist). Currently, the show is airing on PBS Southern California affiliate, KVCR.

I really enjoyed getting to watch the first season of this show.  In fact, I would like to watch it again!  I love watching period dramas and this was no exception.  There are heroes and heroines, good and evil, and plenty of excitement to keep you interested and anticipating the next episode.  The women are women and the men are men!


This drama is inspiring and will remind you of the roots of this once great country.  From INSP's website:


In 1770 America, family-man, tavern-keeper and local Justice of the Peace, Silas Rhodes strives to balance home, business and politics. Together with British deserter Bob Wheedle, they do their best to fight back against the growing tyranny of the British King. The two men lead a band of ordinary men who are secretive soldiers known as the “Sons of Liberty.” With brave acts of midnight justice against local British officials, they battle the bondage of the King’s oppressive laws in the pre-revolutionary township of Courage, New Hampshire.

This powerful drama depicts daily life for families, tradesmen and British officials living in this early American township during the turmoil just before the Revolutionary War. The people, politics and intrigue of the time are presented with historical detail, bringing this significant period in America to vibrant life once more.

Courage, New Hampshire will be going national on INSP on Memorial Day!  It will air on INSP on Monday, May 27th starting at 7pm Eastern Standard Time.

This drama has just the right amount of excitement, drama, and yes, romance.

In Episode 1 ("The Travail of Sarah Pine") a country girl, Sarah Pine (Alex Oliver) is caught in a scandal with a British soldier, Bob Wheedle, with promises of marriage while he is under house arrest for suspicion of kidnapping.  Sarah is abandoned even after bearing Wheedle's child. When Bob returns to the township a year later, again in search of deserters, he endures a bastardy trial presided over by Silas Rhodes. The arrest of a British soldier is embarrassing to Governor Wentworth and he sends Simeon Trapp to defend the crown's interest. Will Wheedle awaken to his obligations? 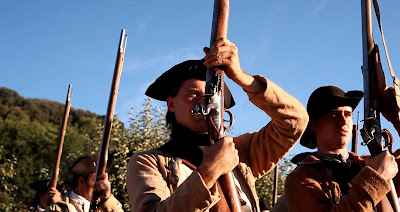 In Episode 2 ("The Sons of Liberty") Justice Silas Rhodes travels to Portsmouth for the execution of two
notorious criminals. Royal Governor Wentworth details the “light hand” needed for ruling the New Englanders, and a new pastor Silence Laud (Donel Thoms-Cappello) arrives in Courage, Township. But something seems askance with Laud.  Is he really a virtuous preacher? 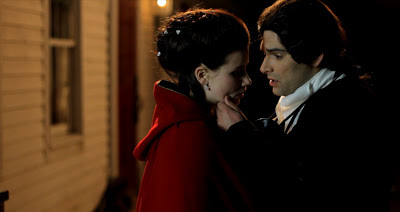 In Episode 3, ("A Snake in the Garden"), Rev. Silence Laud grows weary of Abby's icy, but melting, virtue. Country farmer John Hildreth (Eric Drazin) has a run-in with a Tory judge William Bramley (Patrick Finnerty), who under the auspices of enforcing the White Pine act, tells Hildreth he can't clear the
trees from his own farm. What will the men of Courage do about this?

Well....you'll have to watch to find out!

In future episodes, the story of Courage Township will tell the story of the ways the American Revolution took root in the hearts and minds of ordinary people, long before the actual battles took place. Though fictional, many of the story lines will be based on actual events.

My only complaint about this drama was that in a couple of episodes there is a country dance in which many of the women wear very low-cut dresses we sometimes see in these period dramas.  The rest of the time they were so modestly dressed, so I don't see why the gowns had to be so low cut for the dance.  I know several other films such as Pride and Prejudice include this also and are still much-loved in the Christian community.  But still I wanted to warn you because I would rather they had left that out.

Would you like to see this exciting drama for yourself?  Well, I have good news!  The generous folks who produce Courage, New Hampshire have offered to give away the Season 1 (4-pack) on DVD to one special Blessed Homemaking reader!  This giveaway is only open to U.S.A. residents and will end on May 31, 2013.  Thank you to all who read my blog! 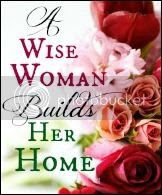 I love period dramas because they remind me of a much simpler time. Not that it was a simple life, but just over all.

I have been looking forward to this series for along time. I would love to win this because we will be out of town when it is shown.

I love connecting with the past and learning about what we got rid of that was good and should work to get back. Thank you for this chance to win these. We don't have tv so unless we purchase the series we won't have a chance to watch and since we are getting ready to adopt possibly 5 children to add to our two we do not have it in our budget to purchase them right now.

A nice way to learn history without the boring textbook lists and dates.

This looks great! I will watch it on Insp. Thanks for letting us know!

I love watching period dramas to learn the ways of life in the past and to share it with my kids. And I like this one particularly because my new son-in-law is in one of the episodes! ;o)

I love period dramas! They are my favorite to watch! I always love to see the costumes

Yikes! We really wanted to like this show but it was truly terrible. I did write a review on my blog as well. We were so disappointed as we had hoped it would be good.
Mary
http://anhistoricallady.blogspot.com

I'm sorry you didn't like the show. Maybe they should have consulted you while making it--Lovely blog you have!

Hi Lady Violet,
Thank you for the compliments on my blog. I surely didn't mean the makers of Courage, New Hampshire should have consulted us for advice, and was only giving an honest review. This was just an awful film series, badly made on all levels, and not at all historically correct. There are lots of really great historical films out there, and it was just our opinion that this was a complete waste of time. We have a well-loved library of many other historical movies and shows we would recommend.
Mary
http://anhistoricallady.blogspot.com

Hi Mary! I hope you didn't take my comment as sarcasm--I really meant it. I will have to check out your blog for movie recommendations. It think I saw on there you like Pride and Prejudice. Did you have a favorite version?

Hi Lady,
Oh, by far the 1996 version with Colin Firth is the best! We have it on dvd and hubby and I watch it once every year!
I do have many recommendations for fantastic historical films on my blog. Our latest 'find' and probably one of the MOST favorite is the BBC's
'By the Sword Divided'---Fabulous!!!

Thank you so much for the suggestions! I will have to check out your other recommendations when I have time!