Do you remember when I wrote this post awhile ago about how my eldest daughter had blessed me with a thank you note from a gift I had given her? I said I would hopefully post a picture of the note she wrote, and I have finally gotten a picture of it! My dear eldest daughter is 8 years old. 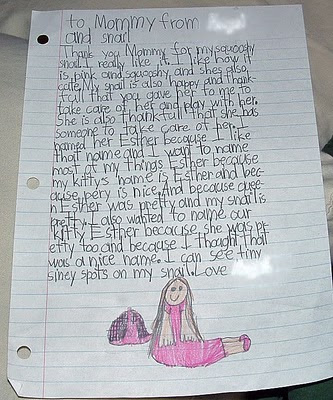 "to Mommy from {Cherished of God} and snail
Thank you Mommy for my squooshy snail. I really like it. I like how it is pink and squooshy and shes also cute. My snail is also happy and thankfull that you gave her to me to take care of her and play with her. She is also thankfull that she has someone to take care of her. I named her Esther because I like that name and I want to name most of my things Esther because my kitty's name is Esther and because pery ("Purry"~their nickname for the kitty) is nice. And because queen Esther was pretty and my snail is pretty. I also wanted to name our kitty Esther because she was pretty to and because I thought that was a nice name. I can see tiny siney (shiny) spots on my snail. Love {Cherished of God}"


My 5 year old daughter also received a similar gift of a small "squishy" frog from me and wrote me a thank you note too. These small gifts from me are some of their most favorite presents! Guided by Faith is 5 and has just started kindergarten in our homeschool. She started reading on her own at 4. 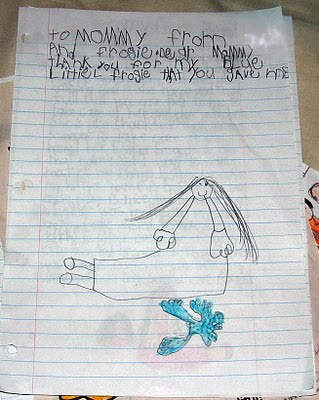 to MomMMy from {Guided by Faith} And frogie. Dear MoMMy thAnk you for my BLue Littiel frogie thAt you gAve mE"

She wrote it all by herself! I love it. It is so great being blessed to be the mother of children.

Thanks for stopping by,

This post is being linked to the Domestically Divine link up.

Email ThisBlogThis!Share to TwitterShare to FacebookShare to Pinterest
Labels: Children, Encouragement, Our Family