This post may not be popular to some, but I feel I must make it regardless, in part because I know a few of my readers want to read the book 1000 Gifts (or are in the process of reading it), plus I also have mentioned in the past that I received this book and was excited to read it.  There are good things about the book, as the articles I am going to direct you to point out:

"Ann Voskamp’s sincerity and her desire for a relationship with the Lord are unarguable. Her honesty in her own shortcomings and frailties is admirable. Her description of how she witnessed the death of her baby sister (run over by a farm truck) when she herself was very young is heart-wrenching. What’s more, few would disagree with the overall key theme of the book that we should give thanks to God in everything (1 Thessalonians 5:18). Voskamp shares how practicing thanksgiving and gratitude has changed her life. Thinking about 1 Timothy 6:6 (“godliness with contentment is great gain”), it is true that being thankful and content does have great gain in the believers life."

But there are also things to be aware of.  It was not long after I began reading this book that I felt that something was wrong.  When reading Ann's visualization of how Adam and Eve sinned in the Garden of Eden and how she said that their sin was not being thankful, I just could not agree.  Does God want us to be thankful?  Yes, of course He does.  But was that the main issue when Adam and Eve fell from grace?  No, I don't think so.  Their sin was simply and purely their disobedience to God, as with every sin.

It may seem like a trivial thing, but it stood out to me and at that point, I put the book aside. 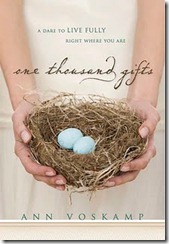 There are some other things that are very concerning to me as a follower of Christ:

"It is clear by reading One Thousand Gifts that Ann Voskamp reads and admires several mystics, panentheists, and universalists. Her book is peppered with quotes by Sarah Ban Breathnach (a New Age author launched into stardom by Oprah), Teresa of Avila, Julian of Norwich, Evelyn Underhill, Brennan Manning,  Annie Dillard, Thomas Acquinas, Buddhist sympathizer and Catholic convert Peter Kreeft, Walter Brueggemann, Francis de Sales, Jesuit priest Pierre Teilhard de Chardin, Henri Nouwen, and Jean-Pierre de Caussade. Many of the statements Voskamp says in her book  would resonate with these authors showing that Voskamp has absorbed some of the beliefs of these people. In addition, Voskamp’s popular blog lists a number of contemplative/emerging authors on her book list page: Richard Foster (Celebration of Discipline),  Adele Ahlberg Calhoun (Spiritual Disciplines Handbook, a primer on Eastern style meditation), and emerging church author Phyllis Tickle are included."

There is more, but I will leave it to you to read, research, and draw your own conclusions.