Letters to Blessings: Where Oh Where is Esther?

Today is the second day that we have not seen our kitty, Esther.  Oh, she is the sweetest, kindest kitty and you love her so.  She has never ever done a mean thing to any one of you.  She lives outside though due to her repeated pursuit of naughtiness whilst indoors.  Outside is where kitties love to run and jump and roll in dirt (and of course chase all manner of smaller animals and insects).

Normally Esther will always come when we call her, (except on occasion when she is just too far off on a kitty adventure), but it is quite unusual for us to not see her for this long.  She will almost always follow us down the street to our mailbox, meowing along the way.

When I expressed concern today to Husband that we had not seen Esther, Cherished of God (9) began to cry.  She was worried about her much-loved kitty.  Esther is a bit partial to Cherished and I.  She loves to sneak up behind us and jump onto our backs if they are in reach like when we squat down to pull weeds in the yard.

I told you girls that after Creative was done washing the dishes and after Cherished of God was done with loading the dishwasher we could go look for Esther.  I thought perhaps Esther had gotten stuck in a neighbor's garage that we have sometimes seen her come out of.  I really hoped we didn't have a repeat of what happened to Elijah.

The girls finished quickly, and all but the baby got ready to go search for our kitty.

I told you all to call her and then wait to listen for her meow (for she would always return a meow when she would hear us calling).  We walked and called, walked and called, down a few streets.  Down past the neighbor's where Esther sometimes snuck into the garage.  The lady even came out just as we approached, so I was able to ask her about Esther.  She checked her garage for us but did not find our kitty.

A couple of neighbors we know came out to talk to us, but they had not seen our kitty.  They did, however, inform us that a man up the street owns a pond.  He has fish in that pond.  Sometimes cats come and swat out his fish from the pond.  So the man has been catching the cats and then taking them to the pound.

I did not want to take the children to the doorstep of a man's house whom I do not know and who takes people's cats off to the pound...so in the morning I will have to call animal control and see if our kitty is there.  We did not find her anywhere else. 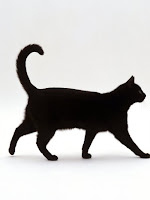 Email ThisBlogThis!Share to TwitterShare to FacebookShare to Pinterest
Labels: Letters to Blessings