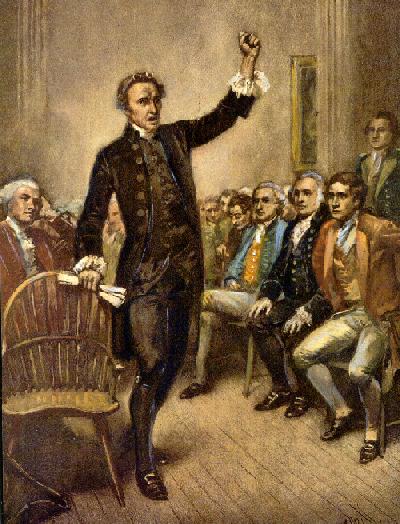 COPIED AND PASTED: IRONICALLY, FOUR DAYS AGO, MARCH 23, WAS THE 245TH ANNIVERSARY OF PATRICK HENRY’S IMMORTAL “GIVE ME LIBERTY OR GIVE ME DEATH” SPEECH. WITHOUT A DOUBT, THIS SPEECH IS REGARDED YET TODAY AS AMERICA’S MOST FAMOUS, MOST INSPIRING AND MOST INFLUENTIAL ORATORICAL PRESENTATION. IF THERE WAS ANY DOUBT THAT AMERICA WAS GOING TO FIGHT A WAR FOR INDEPENDENCE FROM GREAT BRITAIN, THAT SPEECH SHATTERED IT.


"Is life so dear, or peace so sweet, as to be purchased at the price of chains and slavery? Forbid it, Almighty God! I know not what course others may take; but as for me, give me liberty or give me death!"

This speech needs to be repeated in the ears of the American people today, as we again face a new version of subjugation under Martial Law—Medical Martial Law.

In principle, what Patrick Henry said about British overlords could be said about the various health departments and local and State governments that are right now eviscerating the Bill of Rights. As Constitutional Attorney Robert Barnes accurately and astutely noted:

"Our founders were intimately familiar with pandemics, viruses and plagues, yet they did not allow any to suspend our Constitutional liberties. Not one word in the Constitution about plagues or pandemics to exempt the government from any of our Bill of Rights."

How can we not see that fear of the coronavirus is being used to acclimate the American people to the disintegration of our Natural and constitutional liberties? What is the purpose of all of this hype and hysteria about corona if it “be not to force us to submission?”

Let me ask readers something: Is your life more important to you than your children’s liberty?
If it is, then stop pretending to be an American. Stop pretending to believe in freedom. Stop pretending to support our Constitution and Bill of Rights. Stop saluting the flag. Stop commemorating the deaths of the brave men who died “protecting liberty” at Flanders, Verdun, Argonne Forest, Guadalcanal, Iwo Jima, Corregidor, Anzio, Bastogne, Normandy, etc.

Through two World Wars and a Great Depression MY parents, aunts, uncles and grandparents (and those entire generations) endured enough suffering and death to test anyone’s commitment to liberty—many times over.

And after it was all said and done, their descendants (YOU AND I) were handed a Bill of Rights that had been bought and paid in blood—just as their parents and grandparents had handed it to them. Are we now going to surrender the constitutionally protected liberties bequeathed to us by our parents and grandparents—and granted to us by our Creator—because we MIGHT die of a flu-like virus, a virus that has a global mortality rate of less than 1%?

In the midst of our national crisis today, our cry should be the same as the cry of great Americans such as Patrick Henry and my parents during their respective crises: “Give me liberty or give me death.”

I’ll take the risks of freedom over the security of government “protection” (aka oppression) any day!