Tuesday morning the girls told me there was a paper stuck to our recycling can that sits close outside their bedroom window. I needed to take some trash out and when I did I saw that it was a handwritten note. It read,


"Your black and white
cat is lying dead.
Across Pine in the landscape
area just up from the
corner.


What? I thought. Was this some kind of joke? I brought the note in to my husband to let him read it. The children of course wanted to know what it said. I just told them, "Hold on." They would be so upset and I didn't want to cause them unnecessary anguish if it wasn't our cat. Then I took the note and went out the front door, hoping it was not our cat, but a different black and white cat. After all, we had often seen another black and white cat that would come around our yard and bother our kitties. I carried the note with me to try to figure out where he could be. As I got further from our house and approached the cross street by us I saw a black fluffy thing, not in the road, but up off the road between the curb and the sidewalk. Oh no. I crossed the street and got closer. Elijah. It was him. Oh, I hoped, I just hoped, that he was still alive somehow. But then I saw his eyes. He was definitely gone. I looked him over and didn't see any signs of injury. He looked like he had just laid there and died. He was laying on his stomach and his paws were resting up by his face.
I went back to the house to tell my husband. He had gotten dressed and was getting ready outside. He told me to go inside and tell the children. When I went in they looked at me inquiringly. Husband had already told them what the note said. I broke the news to them. Our seven year old started crying first. Elijah was her favorite kitty. When we had put him outside to live there several months ago, she was very upset. He was getting into too much trouble in the house so we made him an outdoor cat. Recently his sister Esther had followed him outdoors since she had chewed up one too many cords.
I called Creative over to me and hugged her close and told her how sorry I was. Our eight year old soon followed, bawling as well. Elijah was only 1 1/2 years old. We had gotten him and his sister when they were little kittens. The girls had lovingly nicknamed him "Fluffy" because of his fluffy fur. 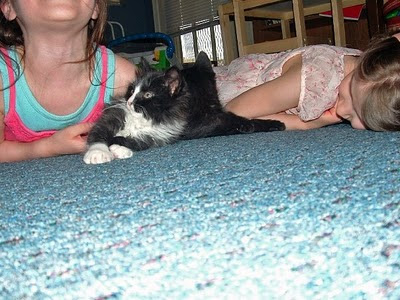 Elijah and Esther as kittens. Elijah is, of course, the black and white one.

I went back out to help Husband get Elijah from where he was. When we picked him up there was some blood that came out of his mouth. We are really not sure how he died. Husband thought he had either died earlier that morning or the night before. He had been at our house the evening before when we had gone out to feed them. Of course we had no idea that it would be the last time we'd see our kitty.

We all got to go outside and say goodbye to Elijah. 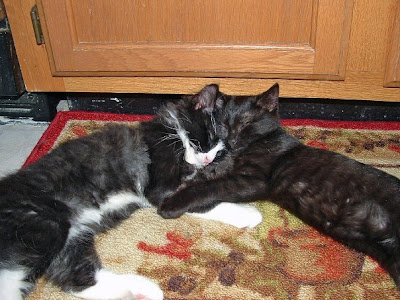 Elijah and Esther together when they were younger.

Husband had said we should bring Esther back in the house so something didn't happen to her.  He instructed me to clean her off and bring her back in. The girls were joyful for this. But shortly after we brought her in she started meowing really strangely. We could barely hear her meows. And when I looked more closely at her I saw white spots all over her ears which were also bumpy. Husband said she would need to go back outside. Since we didn't know what caused Elijah's death we didn't know if something was wrong with Esther too, and Husband didn't want to find a dead cat in the living room or for her to have something that would make us sick.

So outside she went. We have no money for her to go to the vet right now. Hopefully she will be fine. So far she is. The children are doing okay too. Cherished of God, our eight year old, lovingly tries to explain to Creative that it is okay that Elijah died because God said it was time for him to die. I'm glad she understands this, though she is still sad.
Thanks for reading.

Email ThisBlogThis!Share to TwitterShare to FacebookShare to Pinterest
Labels: Children, Our Family