Sneak Peek at the Quillow

A couple of weeks ago I mentioned that I am working on a quilt for our little boy. It is actually going to be a quillow, which, if you don't know what that is, is a quilt and pillow all in one. It is sewn in such a way that you are able to fold up the quilt inside of a "pocket" on the quilt to make a pillow when you are not using the quilt as a blanket. I started this (along with my husband) back in March before our sixth child was born. After baby came, I seem to have no time whatsoever for sewing! I thought I would post a picture of what I'm working on, since some of you had asked. It was taken the very first day we worked on it. I have to warn you, I have no idea what I am doing. I have never made a quilt, much less a quillow. The only training I have in sewing is a tiny portion of a home economics class I took way back in middle school. I do know to make a 1/4" seam allowance, but that's about it. 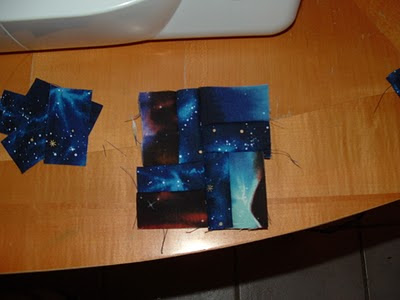 This is one square of the quillow that I sewed, actually, my first try. Obviously the edges don't line up (which may be mostly due to the pieces not being cut evenly), but I was pretty happy that I could sew in a straight line at least after about 15 years of not sewing!

Husband picked out the fabric for our son and designed the pattern for the pillow part of the quillow. I will try to get an updated picture of the pillow soon, for that is just about done. He showed one of his uncles who actually makes quilts (among many other thing) the design. His uncle said it is actually a very complicated design. Hopefully I can figure out what I'm doing with the rest of it, as this is completely foreign ground to me. Drawing and painting come so easily to me. I just look at something and can pretty much put it on paper. But this is much more difficult, though I do enjoy it so.

How are my lovely readers today?

Email ThisBlogThis!Share to TwitterShare to FacebookShare to Pinterest
Labels: Sewing